There is a global increase in occupational exposure to solvents, some of which are suspected to cause acute or chronic toxic nephropathies in humans. However, limited studies have been done to evaluate the systemic effects of exposure to some of the commonly used solvents such as paints.

The aim of the present study was to assess the effect of chronic exposure to paint fumes on renal and hepatic functions of industrial spray painters. Methodology In this cross-sectional study, 49 occupationally exposed male industrial spray painters who had served for greater than 5 years were evaluated for changes in renal, hepatic and hematological indices using standard instruments and results were compared with levels in the unexposed (sex and age-matched) participants.

Prolonged exposure to paint fumes may be associated with a significant risk for hepato-renal dysfunction and hematotoxicity. Preventive measures should include limiting exposure and using antioxidant medications.

Some of these chemicals may exist alone or in combination in pigments or in solvents. A typical example is paint which consist of a mixture of pigments and solvents. Some pigments found in paints include: white lead, titanium white, red lead, venetian red, chrome red, zinc chromate and chrome yellow, while solvents such as hydrocarbon solvents (aliphatic and aromatic hydrocarbons), halogenated solvents (chlorinated hydrocarbons) and oxygenated solvents (alcohols, glycol ethers, ketones and esters). Furthermore, some volatile organic compounds (VOCs) are added to paints to attain the desired quality such as to enhance dryness due to their volatile nature. VOCs and other constituents vaporized easily and emit gasses that cause widespread environmental pollution. The percentage composition of these chemicals in paints is dependent on the physiochemical needs of the paints.

Millions of people around the world are exposed to the toxic constituents of spray painting fumes that contaminate the air around them and the worst affected are workers who are in occupations with the highest burden of paint fumes exposure such as the spray painters. When inhaled, the chemicals are readily absorbed, metabolized and distributed to various organs in the body. The active metabolites undergo further toxico-kinetic modifications and leading to generation of reactive oxygen species (ROS), oxidative tissue damage and altered structure and function. It is now known that exposure to chemicals with very diverse chemical structures and compositions such as paints may produce a wide range of health effects due to the synergistic actions of the different components, including effect on the kidney, liver and blood cells.

In view of the drawbacks of previous studies such as isolated use of serum biochemical indices of renal function (creatinine, blood urea nitrogen, uric acid) with no adjustment for known confounders such as age, gender, body mass index and dietary factors, and the fact that the toxicokinetic properties of nephrotoxic chemicals may be modified by individual susceptibility factors2 (age, gender, genetic susceptibility, exposure concentration, duration of exposure, race and ethnicity).

This cross-sectional study was carried out between June 2017 and May 2018 among Industrial spray painters whose workshops are located in Uyo and Ikot Ekepene Local Government Areas, Akwa Ibom State, Nigeria. A total of 97 (49 exposed and 48 unexposed) male participants of the 122 initially invited to participate were recruited for the study.

Others were excluded from the study for not meeting the inclusion criteria.

Exclusion criteria were as follows; age outside the study age (18 to 40 years), workers who had served for <5 years on the job, decline participation, inappropriate completion of the study questionnaire, presence of any metabolic syndrome clusters or on medication for any of the metabolic syndrome, concomitant exposure to other solvents besides paints, smoking, binge drinking of alcohol, dehydration, dieting and suffering from any other debilitating disease.

Study design and experimental protocols were approved by the Institutional Human Ethics Committee and participants signed written informed consent. Participants were briefed about the study and participation was voluntary. They were also allowed to withdraw from participation at any stage of the study.

The study was conducted according to the rules set forth in the Declaration of Helsinki, governing the conduct of human research.

Anthropometric indices measured in this study were weight (kg) and height (m) with light clothing and without shoes. Weight was measured using a portable weighing scale to the nearest 0.1 kg and height was measured using a height measuring tape to the nearest 0.1 cm. All measurements were performed twice and the average of the two measurements was used. Body mass index was calculated from the formula BMI= weight (kg)/height2 m2.

Venous blood samples were obtained from all participants for biochemical analysis including renal, hepatic and hematological evaluations.

All measurements were done using standard methods and the quality assurance was strictly complied with. eGFR was calculated using Modification of Diet in Renal Disease (MDRD) and Cockroft and Gault Equations as follows:

The hepato-renal and hematological indices of the participants (exposed and unexposed) were computed, and results expressed as mean±standard deviation (SD). Significant differences in hepatorenal and hematological indices between groups were established using independent t-test with p<0.05 level of significance. Computations of results were done using Statistical Package for Social Sciences (SPSS) version 22.0, while graphical representations of results were done throughout using graph pad Prism.

Results of the present study showed that prolonged exposure to paint fumes could be detrimental to hepato-renal endpoints and hematopoietic functions.

The above findings are consistent with previous studies that showed that prolonged exposures to environmental/ occupational solvents are important contributors to the rising incidences of hepato-renal and hematologic disorders in the general population.

Paint is a mixture of pigments (white lead, venetian red, zinc, chromate, etc.) and solvents (gasoline, turpentine and coal hydrocarbons). These substances have been shown to have demonstrable nephrotoxic,4 hepatotoxic5 and hematotoxic6 effects similar to the results of the present study. Accordingly, Al-Ghamdi,7 studied the kidney function of car painters who had prolonged exposure to paint fumes and found a significant higher mean serum value of Cr, Ur and UA than levels in the unexposed groups.

Similar to findings of the present study, a plethora of research shows significant correlation between exposure to solvents and hematotoxicity.10-12 Although largely hypothetical, a consideration of existing research findings suggest a number of pathophysiological mechanisms underlying the adverse hepatorenal effects of solvents (e.g., paints and constituents), including the generation of reactive oxygen species (ROS) following their breakdown to reactive metabolites by Cytochrome P450 monoxygenase and beta-lyase mediated pathways and subsequent interaction of ROS with renal tissues to cause damage to renal glomerules, tubular epithelial cells, and macromolecules such as sodium/potassium/adenosine triphosphatase (Na+/K+/ATPase) and alter their activities with a resultant renal injury

Na+/K+/ATPase is an enzyme involves in electrolyte and water homeostasis. It regulates serum Na+, K+ and Cl by pumping 3 Na+ out of the cell for every K+ pumped into the cell, hence it’s regarded as a 3 ion co-transport system. Available evidence suggests that this enzyme is inhibited by metabolites from solvent constituents and leading to altered electrolytes, water and acid-base homeostasis including increased serum Na+ and decreased serum K+ as observed in the present study.

Such damage has been shown to alter the functional integrity of the membrane, impairs Na+/K+/ATPase activity and several other enzymes involved in ionic and acid-base balance. Also, associated tubular damage can cause tubular dysfunction, impairs renal excretory function, macula densa cell signaling mechanisms, renal hemo-dynamics/autoregulation and poor handling of metabolic waste products with a resultant increase in serum Cr, Ur and UA as observed in the present study.

Likewise, glomerular damage could interfer with dynamics of glomerular filtration and ultimately leading to decrease GFR as observed in the present study.

Induction of OS by metabolites from paints has also been reported to cause disruption of the immune system and induced inflammation. There is associated auto-immunity, T-cell dysfunction, suppression of immune function, increased postglomerular resistance and decreased GFR following exposure to solvents as reported previously.13 At this point time, it should be noted that solvent-induced kidney injury is not an isolated process, evidence has been garnered suggesting that solventinduced kidney injury could be extended to cause the dysfunction of other remote organs such as the liver, blood cells, heart, lungs, intestines and brain via a pro-inflammatory mechanism mediated by inflammatory mediators such as neutrophil cell migration and cytokine expression and increased oxidative stress.14 This can partly explain the associated hepatic and hematological disorders including cirrhosis, hepatitis, necrotic inflammatory hepatitis, cholestatic liver disorders, anemia, leukocytosis, luekopenia and changes in liver enzymes reported previously in solvent exposed workers (AST, ALT, ALP),5 and some of which are observed in the present study. These findings are consistent with data of Golab et al,15 White et al16 and Lane et al17 who independently demonstrated hepatic dysfunction as a consequence of acute kidney injury. The hematological profile of the exposed subjects showed that there were significant decreases in the erythropoiesis modulated hemocytic variables (PCV, total RBC, MCHC, MCH and MCV), total WBC, acute inflammatory cells (neutrophils, basophils and monocytes) and platelets, whereas a significant increase was found in the level of chronic inflammatory cells (Lymphocytes). These findings indicate that induction of chronic inflammation could serve as one of the pathophysiologic mechanisms of paintsinduced hemato-toxicity. Other mechanisms of solvent-induced hepatic and hematologic disorders include induction of cellular degeneration and down regulation of gene expression. 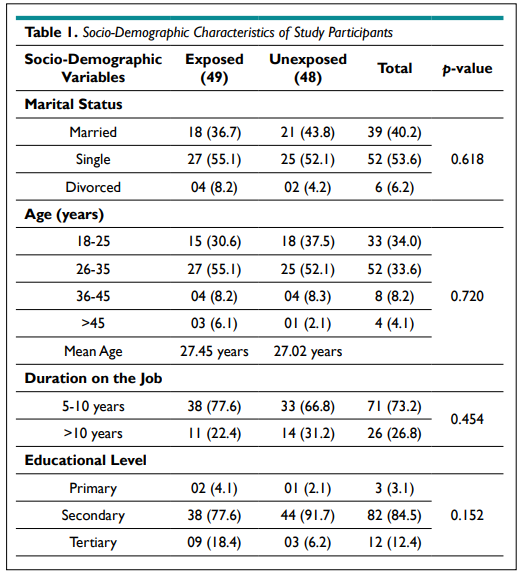 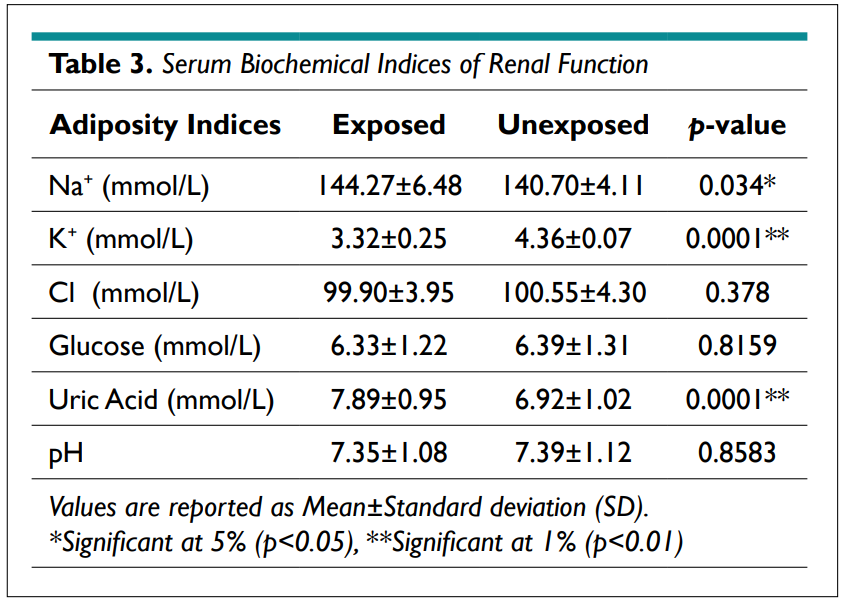 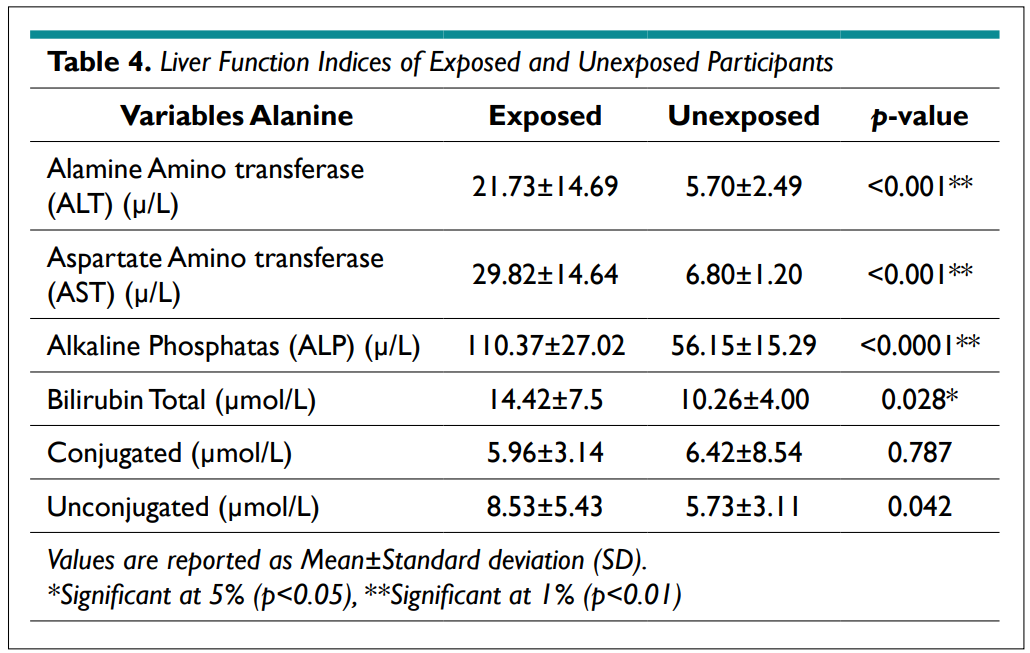 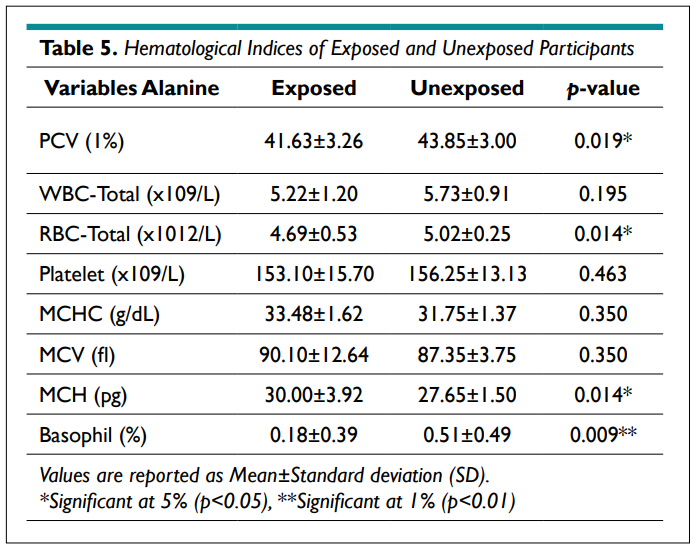 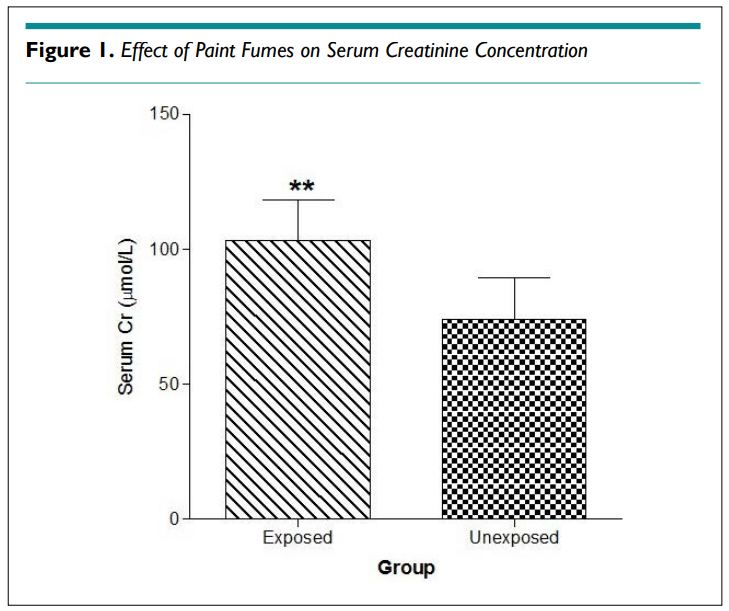 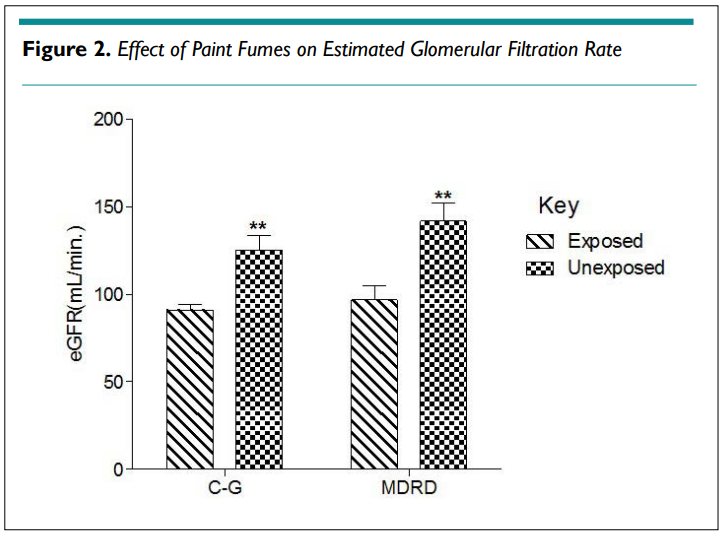 Serum UA and Ur were significantly (p<0.01) higher in the exposed compared to levels in the unexposed group (Figure 3). 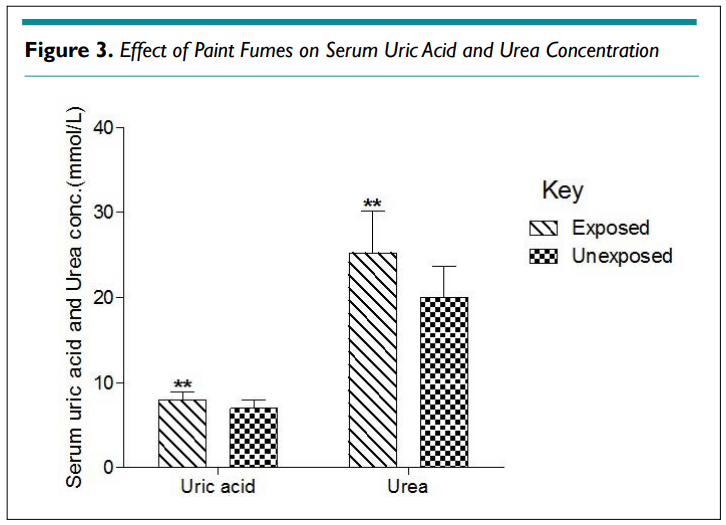 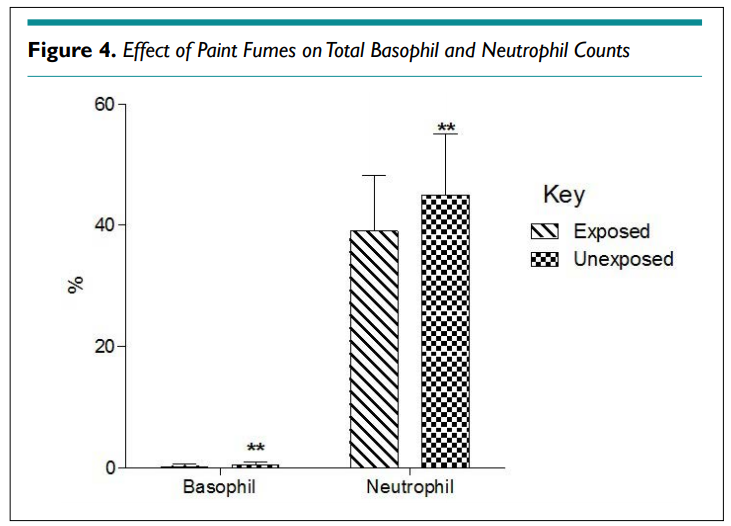 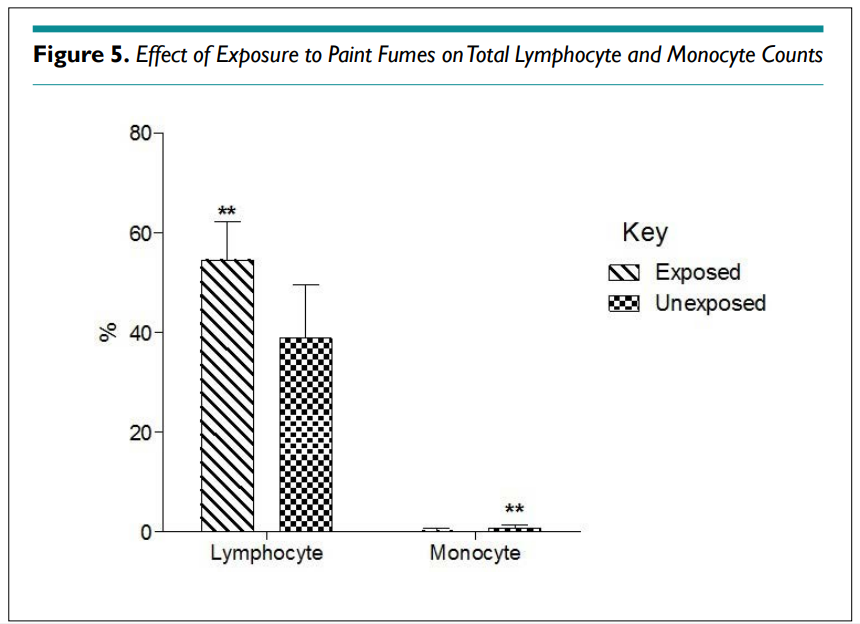 Results of the present study suggest that prolonged exposure to paint fumes may be associated with a significant risk for hepatorenal dysfunction and blood cell disorders.

Preventive measures should include limiting exposure and using antioxidant medications. Pre-employment evaluation of renal and hepatic functions should be conducted and repeated periodically in potentially exposed and the already exposed workers since some paint constituents have been shown to initiate hepatorenal injury and hematotoxicity or worsen extant hepato-renal function impairment or both.

We are thankful to the management of the spray painting sites where the work was carried out. We are also grateful to Mr. Sampson Kayode for his numerous contributions to the success of this work.